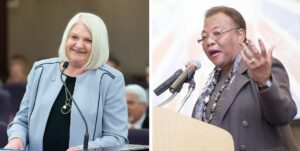 Local leaders have filed legislation to provide equal pay in the workplace by strengthening existing state laws. State Representative Geraldine Thompson and State Senator Linda Stewart will be holding a press conference on their bills, Senate Bill 256 and House Bill 107: Discrimination in Labor and Employment, to provide more details on the proposed legislation on February 3rd.


“Individuals should be judged based on their ability to achieve job requirements and not factors over which they have no control,” said Representative Thompson. “This legislation would prohibit discrimination against people in the workplace.”

The bills seek to eliminate the wage gap experienced by women in the state of Florida. It would strengthen existing laws that prevent wage discrimination on the basis of sex.

“Florida currently has a wage discrimination law on the books, but it’s not working as well as it should,” said Senator Stewart. “It is time that we further the discussion in the legislature on eliminating the wage gap and work to provide protections for victims of wage discrimination.”