Lighthouses tend to capture the imagination. Over the decades, these majestic beacons have become romantic symbols in literature and art. Today, they continue to inspire and are visited by millions each year. 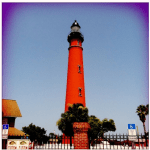 Completed in 1887, the brick and granite structure was badly needed at Ponce Inlet due to the many shipwrecks along the coast. During its early history, the beacon was powered by various forms of oil and had to be carefully maintained by a keeper. It was electrified in the early 1930s with a 500-watt lamp and was modernized again a few years later with a revolving, flashing Fresnel lens.

By the 1970s, the lighthouse had been abandoned by the Coast Guard and fell into disrepair. Inlet residents soon came to the rescue and restored the tower to its original glory. In the 1980s, it was designated a National Historic Landmark, one of only ten lighthouses to earn the honor. The lighthouse was eventually returned to active service and continues to shine brightly over the inlet today.

Visitors who aren’t afraid of heights or confined spaces have the opportunity to climb 203 steps to the lighthouse’s observation deck. The top offers a panoramic view of the area including Daytona to the north, New Smyrna Beach to the south and miles of ocean to the east. If you go during the summer months, be prepared for temporary closures due to thunderstorms and the possibility of lightning.

Back on the ground are a number of restored outbuildings that provide a glimpse of a keeper’s life as well as a history of the area. One building contains the 5-foot tall third order Fresnel lens used at the lighthouse for several decades. It’s beautifully preserved and continues to function.

Next door is a shaded picnic area for families to enjoy. And a short drive away is the 52-acre Lighthouse Point Park where visitors can go fishing, swimming and hiking. All in all, it makes for a relaxing day away from the crowds of Orlando or Daytona Beach.

Admission to the Ponce Inlet Lighthouse and grounds is $5. There’s a separate fee if you plan to visit Lighthouse Point Park. The lighthouse is located 10 miles south of Daytona Beach on A1A.

MEAC/SWAC Challenge features Wildcats vs. Braves in Battle on the Beach