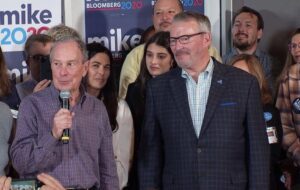 Of course Orlando Mayor Buddy Dyer chased after Mike Bloomberg (and his big money) just before the billionaire dropped out of the Democratic presidential primary. Dyer also can’t help supporting Republicans, which Bloomberg was until it wasn’t convenient for him. But Buddy really can’t help chasing big money, rich people who help his local ponzi scheme and make him feel important.

Did Dyer watch the last two debates? They were absolutely disastrous for Bloomberg. It was clear the Democratic Party had already rejected Bloomberg’s attempt to buy the nomination. Buddy Dyer didn’t care. He chose to support an out of touch, former Republican, extremely problematic former Mayor named Bloomberg. He’s taken Bloomberg’s money before, wonder if he expects another pay out for his lame endorsement?


It’s just so expected. Now, Dyer has changed his endorsement to Joe Biden. Biden better watch out – the Dyer kiss of death has now been passed on to him.

On a side note, I do have to say, it was funny reading Dyer’s quote of “I like Mike,” since that was the home of my personal blog and a slogan I use opposite of “Not My Buddy.” Thanks for using my slogan, Mayor!