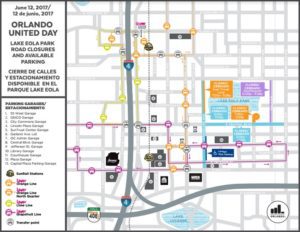 The City of Orlando and Orange County, in collaboration with Pulse, have designated June 12, 2017 as “Orlando United Day – A Day of Love and Kindness.” In conjunction with these events a number of road closures will occur.

The City of Orlando encourages attendees to plan their travel and parking before going to any of the events. Travelers are encouraged to consider alternative modes of transportation including, LYMMO, bike share, car share and carpooling. Detour signs will be clearly posted before and along detour routes. More information on road closures and parking options below.

SunRail has also announced they will run an extra night train for the Pulse vigil on June 12th.


On Sunday, June 11th, and Monday, June 12th, on-street/metered parking spots will be unavailable for general public on the south and east side of Lake Eola Park, this includes Rosalind Avenue and Central Boulevard. Limited ADA parking will be available on Rosalind Avenue between Jackson Street and Pine Street. Parking apps that can assist in finding parking in the area include parkIN’ app, ParkMe, or Parkmobile. Recommended parking locations for the Lake Eola event from officials is the city parking garages. 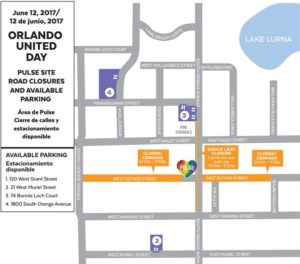 SOME ACTIVITIES ON THIS DAY INCLUDE: