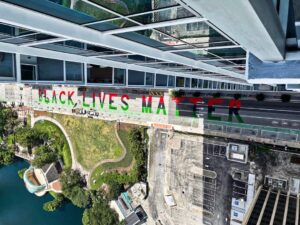 Sorry Buddy Dyer, your empty gestures like the recent painting of ‘Black Lives Matter’ on a downtown street will not erase the reality of your troubled administration. In typical Orlando fashion, Dyer’s actions are nothing more than a façade. This will not make amends for Buddy Dyer after years of police brutality and pleas from the community for reform were ignored and rejected at every City Council meeting. This will not make amends for Buddy Dyer’s gentrification and absolute destruction of Parramore, Orlando’s historically African-American neighborhood.

No, I’m sorry, this street paint means nothing when local politicians like Buddy Dyer have been in office for decades and have never done anything for issues like this before. This is a cheap gesture considering the damage Dyer and his rubber stamp City Council have done over the years, and he should get no credit.

Does Orlando Mayor Dyer really think he has accomplished something, or does he think the community is that stupid? In Orlando, the Mayor has all the power – he literally controls the entire agenda. If Dyer wanted to make amends with the Black community, he would be passing real reform and changes through City Council. Unlike other complicated political issues, Democrat Buddy Dyer is literally the one person responsible for local conditions with the strong-arm mayor system in Orlando, and City Commissioners have long served as nothing but a Dyer rubber stamp. Well Mr. Mayor, much more will be required because of what you have done. Where are the real policy proposals?


I have personally witnessed Buddy Dyer roll his eyes at Black residents speaking to City Council. I have personally witnessed Buddy Dyer ignore Black residents and simply move on with the agenda after their comments as if they never existed. That says more about a person’s character than a political show like painting the street. There are countless examples of Dyer not caring about Black lives in Orlando.

Buddy Dyer has never cared about Black lives being abused by his own police force downtown. Dyer didn’t care about Noel Carter’s life when he was beaten by Orlando police on a downtown street. The Noel Carter case exemplifies the bad side of Orlando, but it is only one of too many bad stories. In fact, Dyer pushed to have Carter charged, he supported Police Chief John Mina, and he ignored Black residents when they spoke at City Council.  He still has not admitted what was done to Noel Carter, even though the City just settled the excessive force case by Carter for $95,000.

Dyer didn’t care about Terre Johnson’s life and safety when he was beaten by Orlando police on a downtown street. Terre Johnson simply put his foot in the street, and that apparently justified his beating, illegal arrest, and constant harassment from the city, based on Dyer’s leadership. It was branded ‘The Beatdown that Just Won’t Go Away,’ and it’s still moving through the legal system. In fact, after this incident Dyer continued to support local police, and Chief Mina, and never initiated any change yet again. Johnson has been targeted since the original incident by OPD, who harasses him because he is suing the city. Nationally-acclaimed attorney Ben Crump has joined another local champion, Attorney Natalie Jackson, to take on Dyer’s city administration in this case.

Even when the Orlando Police Review Board rejected the exoneration of the OPD officer in the Terre Johnson case, Dyer refused to give the board any merit. Dyer ultimately rejected the review board to stand by John Mina and OPD over the community. They were clearly doing what Dyer wanted. Still not convinced? Check out this recap of Orlando Police Brutality and Excessive Force and ask yourself why Buddy Dyer would continue to endorse John Mina for Orange County Sheriff after his tenure with OPD.

The Orlando Police Review Board is just another surface level action by the mayor. It means nothing, just like the street paint.

And remember when Buddy Dyer made it illegal to draw on the streets or sidewalks with chalk? He didn’t agree with the message so he used local police to enforce his tyranny. Now, he thinks he can just paint BLM on a street and be a community hero? We all see through the Dyer façade. This is just Dyer’s attempt to hijack a community message that he has long been against based on his own policies and his own behavior. How many other Black lives have been destroyed on Dyer’s downtown streets?

The hypocrisy of Buddy Dyer makes this whole situation even worse. Don’t let career politicians like Dyer get away with things like this.