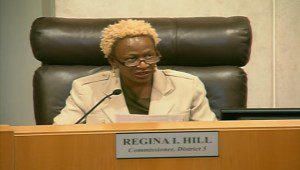 According to records obtained from City Hall, Orlando Commissioner Regina Hill enjoyed an expensive 5-day trip to Washington DC last month, all charged to her taxpayer-funded expense account. Commissioner Hill justified her five days of city-paid travel by claiming she needed to attend the 2016 Congressional City Conference, in partnership with the National League of Cities. However, based on the Commissioner’s official schedule and conference fees, there was not much “official city business” being conducted by Hill to justify thousands of dollars in expense charges to taxpayers.

On top of that, Regina Hill charged taxpayers even more money for upgrades to her airfare and hotel options, despite already having cheaper options. For instance, her flight to Washington DC on United cost taxpayers $247.20, but there was an additional $123.10 charged as a “difference in fare” on the city-issued credit card for her ticket. Did someone upgrade her seat while trying to hide it?

She upgraded her luxury DC hotel on the taxpayers’ dime. Now, that is really telling about the Commissioner’s character, or her lack of it. The City of Orlando Records Department confirmed Commissioner Hill decided not to use the originally booked room at the Hilton which was less expensive.

Orlando taxpayers were charged extra money so the District 5 City Commissioner could live large in DC. Why is this even allowed to be happening?

Think about it. Given her history, Regina Hill has no real financial literacy. She never had a credit card with a $125,000 cap before. She does not have experience balancing a budget – in fact, she is not even able to make payments on the only home she owns or her personal car, where she owes another $29,000. Regina Hill is currently facing foreclosure and bankruptcy, despite making a gross monthly income of $4,654 as City Commissioner.

But she does have a taxpayer-funded credit card. And now Regina Hill is living large.

There is also nothing in the records obtained from her office to reference “official city business” being conducted or to justify Hill spending five days in Washington DC while charging local taxpayers. According to Hill’s own official schedule, only one conference session was listed, “Public Safety and Crime Prevention,” during a three-hour block on March 6th. Other than that, only a reception on March 7th is listed. That’s it. She could have been roaming around DC or doing who knows what during the rest of her time in Washington. Hill’s office refused to produce a detailed itinerary of the Commissioner’s trip and the City closed the records request meaning no other documents exist outside of what has been obtained.

There are sure to be additional taxpayer charges related to this trip over the next few weeks, after Hill seeks potential reimbursements for bag fees, taxi costs and food charges. Check out how she and all the Orlando City Commissioners spent your tax dollars last year for an idea of how much each spends.

There is no accountability. All this outrageous spending from Commissioner Hill, who voted along with Mayor Buddy Dyer to raise taxes and increase fees on residents. Mayor Dyer is responsible for the controversial spending as his office looks the other way. In return, Dyer has received Hill’s unconditional support on the City Council so far. In fact, Dyer was the tie-breaking vote to increase the Commissioners’ expense accounts to $125,000 per year – a proposal pitched by Regina Hill.