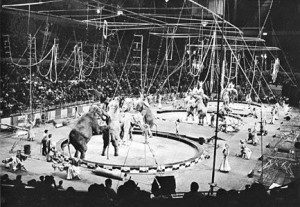 “The NBA today was a 3-ring circus,” he responded, “and we were in the Big Top.”

Since the lockout’s long overdue end, questions have focused on whether or not Shaq Howard plans to sign an extension with the Magic or leave via Free Agency after the 2011-2012 season.

This would continue the Orlando Magic’s long standing tradition as a farming team, recruiting prospective centers, shaping them into All-Stars, then watching them leave in their prime to win a championship in L.A. (or in this case maybe New Jersey or Dallas).

Howard, using the same Public Relations experts (see: his friends and family) as recent free agents Lebron James and Carmelo Anthony, openly announced that he has requested a trade from the Orlando Magic, citing ownership as a key reason.

It was certainly the fault of the owners and Magic General Manager, Otis Smith. It’s Smith’s fault the Magic’s shooting percentages against the Atlanta Hawks in round one of last year’s playoffs were closer to batting averages in Baseball than one of the leagues best 3-point shooting teams. It’s the owner’s fault Joe Johnson and Jamal Crawford of the Atlanta Hawks couldn’t miss a shot, even if someone stood under the hoop and shook it.

But, to be fair, let’s hear Howard out.

“We’ve sat down and talked plenty of times this summer before the lockout and after the lockout,” Howard claimed, “They know what I’ve asked for and what we need as a team, and nothing that we’ve talked about has changed or anything.”

Who knew the problem was so simple? Management simply hasn’t been listening to Howard. After all, as a General Manager, what does Smith know about building a team? As a highly-skilled player in the NBA, it’s no wonder Howard feels that he should have his hand in the management cup; after all, what qualifies you more to run and manage a team than being a player… right? How hard could it be?

Not to be outdone by the side shows of other star-player trade rumors, Howard relaxed his stance the next day, going so far as to hint he may yet stay with the Magic if his wise suggestions are listened to.

Most of his suggestions follow an advanced, beyond our understanding, mathematical formula:
If (new player) = (star), then (new player) + (team) = (Championship).

This secret formula was shown to be highly effective last year when the Knicks Heat Nets Mavericks won the championship using their new old star player.

Right now, the current trade on the table for the Magic is a three-team trade involving the Portland Trail Blazers and the New Jersey Nets, which would ultimately send Howard to the Nets, one of his preferred destinations… at least it would have had Otis Smith not squashed the trade and announced the team is ending trade discussions for their All-Star Center.

Ouch! Howard has to be upset about that. Instead of asking Howard how he feels, let’s ask the unnamed “league sources” that are ever-present and ever-reliable.

Adrian Wojnarowski of Yahoo! Sports reported, citing those same “league sources”, that Dwight Howard is “not a happy camper.” Furthermore, one “source close to Howard” reported to Wojnarowski that “He runs hot and cold… he just doesn’t always know what he wants.”

Besides likening Howard to a faucet, these sources, if true, paint a sympathetic picture of Dwight Howard, a star who is tortured by the thought of having to leave his team.

What does the main attraction, Dwight Howard, think about these reports on his trade request?

“It still stands,” Howard said. Asked whether he fluctuates day to day, he answered, “There is no back-and-forth.”

Hmmm… maybe Stan Van Gundy was right, this really is a three-ring circus. How about extra butter on my popcorn?