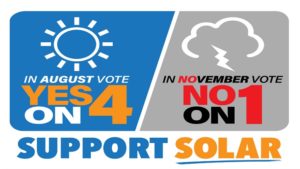 The Orange County Democratic Party unanimously voted to endorse Amendment 4, the solar tax abatement amendment on Florida’s 2016 August election ballot. Party members also voted not to endorse (urging the public to vote NO) the dueling solar ballot initiative, Amendment 1, which will be in front of voters on the November ballot.

At the August 15th general membership meeting of the Orange County Democratic Executive Committee (OCDEC), precinct committeewoman Maria Bolton-Joubert made a motion requesting that the local party move forward with supporting and endorsing Amendment 4, the solar tax abatement amendment on the August Primary Ballot. Precinct committeeman Doug Head added a friendly amendment to add that the OCDEC will not support the rival solar initiative Amendment 1, which will be placed on the November ballot. This motion was seconded and passed unanimously by the Orange County Democratic Party.

Voting “Yes on 4” on the August ballot will remove a barrier of solar by exempting the panels and other renewable energy equipment from property taxes for 20 years. If passed in August, this policy will lower the cost of solar, increase clean energy jobs, and greatly expand solar development across the Sunshine State.

The OCDEC is asking all citizens and voters in Orange County to “Vote Yes on 4 in August” and “NO in NOvember.”