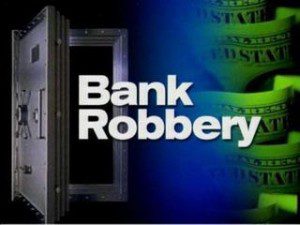 Three bystanders helped an Orange County deputy catch a suspect believed to have robbed a bank on South Orange Blossom Trail, on Thursday.

Investigators say, the male suspect walked into the SunTrust Bank at 6900 South Orange Blossom Trail, wearing a doctor’s mask and ball cap, implied he had a weapon and demanded money from the teller. After receiving an undisclosed amount of cash, the suspect fled on foot.

Later, a deputy approached a man matching the description of the suspect at 827 West Lancaster Road and a struggle ensued. But three bystanders observing the incident, jumped into action to assist the deputy in detaining the man, until backup arrived.

A doctor’s mask, ball cap and an undisclosed amount of cash were found in the suspect’s possession, investigators said.

Investigators have not released the identity of the suspect.

Have you seen this suspected bank robber?