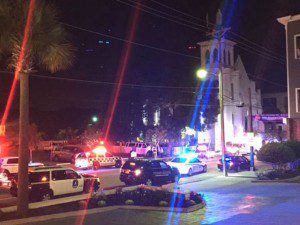 Nine people are confirmed dead after a white male, walked into an historic African American church in downtown Charleston, South Carolina, and opened fire during a prayer service, in one of the most horrific attacks on a place of worship in recent memory.

Charles Police Chief Greg Mullen described the attack as a “hate crime” at the Emanuel African Methodist Episcopal Church, one of the oldest in America.

Meanwhile, the gunman remains on the loose and police have launched a manhunt for the killer who is described as a clean-shaven white male in his early 20s, with sandy blond hair and a small build. Police said he was wearing a gray sweatshirt, blue jeans and Timberland boots.

The names of the nine victims have not been released, but it is believed that a senior pastor and a state senator are among the dead.

Charlestown Shooter Gives Motive For Massacre: “You rape our women and you’re taking over our country”

Yawn: Yet Another Bachmann Gaffe