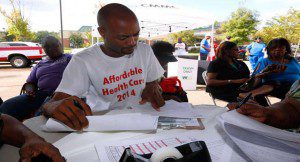 One day very soon, the focus on Obamacare will turn from signing up new enrollees to quantifying the law’s success — or failure.

The six-month open enrollment period, during which consumers sign up for health plans under the Affordable Care Act, is supposed to end today. But the U.S. Department of Health and Human Services, as well as many states running their own marketplaces, are giving some extra time to consumers who’ve had trouble signing up.

It’ll probably all wrap up by April 15. Then, the final numbers will be tallied and the pronouncements will begin. Politicians on both sides of the aisle will use the same data to proclaim that they were right about the law.

Last Thursday, the Obama administration said that more than 6 million people have signed up for coverage on the health insurance exchanges, meeting the projections set out by the Congressional Budget Office. Republicans have countered by questioning how many enrollees have paid their first month’s premium, the final step necessary for coverage to be in effect.

Dr. David Blumenthal of the Commonwealth Fund recently told me that any attempt to review the success of the law must go beyond those who sign up for coverage on the exchanges. It should include those who gained coverage through the expansion of state Medicaid programs for the poor, as well as young adults who are now able to stay on their parents’ health plans because of the law.

“I think the real success of the law will be judged over 5 years, not six months,” he said. “In fact, this president, President Obama, has until January 2017 to establish it as a fixture in the American social policy firmament.”

That may well be true, but now seems like a reasonable time to take stock. So, how should success — and ultimately the law itself — be judged? Here’s what some experts are saying about which metrics to use and the problems with each.

What percentage of previously uninsured people are finding coverage under the exchanges?

We can’t answer this question yet because we don’t know whether those signing up for coverage were previously uninsured. In fact, some enrollees, perhaps many, had their insurance plans canceled at the end of 2013 because the plans did not meet the requirements set out by the ACA. Obama administration officials have not released any numbers on this.

That said, a recent report from the Leonard Davis Institute of Health Economics at the University of Pennsylvania and the Robert Wood Johnson Foundation compares enrollment data through the end of February (with one month left to go in the official open enrollment period) to the number of eligible uninsured people in each state.

Here’s what the researchers found:

“Overall, more than 4.2 million people have enrolled and picked a plan through the exchanges, about 14.8 percent of all potential eligibles. The enrollment rate varies from state to state, with a high of 54 percent in Vermont to a low of five percent in Massachusetts. We should note that Massachusetts had the lowest rate of uninsurance in the nation since its health reform in 2006; its previous success might mean that the remaining uninsured population could be especially difficult to reach.”

Here’s a graphic from the report showing the states in which the greatest share of uninsured received coverage (through February).