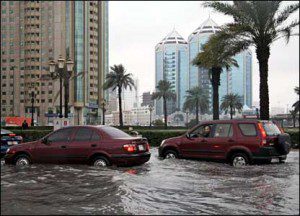 Even as Gov. Rick Scott has denied his administration ordered DEP employees, contractors and volunteers not to use the terms “climate change” and “global warming,” at least a dozen DEP employees and employees from other state agencies have come forward to confirm there was an unofficial policy not to use these terms.

From Florida Center for Investigative Reporting:

Bill Taylor was the assistant district right of way manager for the Florida Department of Transportation’s District 4 office in Fort Lauderdale. He retired last year after 19 years with the DOT. He said he was told not to use certain terms during a meeting of district managers.

“It was at a routine meeting in probably 2012 or 2013,” Taylor said. “At one point, it was mentioned very casually that in our future dealings with the public, we were not to use the terms ‘climate change’ or ‘global warming.’ But it was OK to talk about sea-level rise, because for some projects that had to be taken into consideration.”

And from the Miami Herald:

Kerry, a longtime champion of combatting climate change, said the officials were ignoring the scientific facts.

“Now folks, we literally do not have the time to waste debating whether we can say ‘climate change,'” Kerry said during a speech at The Atlantic Council, a Washington think tank. “Because no matter how much people want to bury their heads in the sand, it will not alter the fact that 97 percent of peer-reviewed climate studies confirm that climate change is happening and that human activity is largely responsible.”

Kerry did not refer to Scott by name but said that he had read in the last “couple of days” reports about the ban.

Big Tech’s Absolute Power: A Threat to Freedom of Speech and Competitiveness