Agents of the Metropolitan Bureau of Investigation said Friday, 26 arrest warrants have been issued for defendants in a drug trafficking organization which stretches from California to International Drive, the heart of Orlando’s tourist district.

During the course of their investigation agents found that an elaborate drug trafficking organization was shipping cannabis by overnight delivery from California to hotels on International Drive.  Workers within the drug trafficking organization would stay at the hotels, accept the parcels and then utilize taxi cabs to transport the cannabis to area stash houses. The cannabis was then delivered to others in the criminal distribution network, who then engaged in wider distribution.

The cannabis supplier based in California was Binh Tran, 35; the head of the Florida portion of the drug trafficking organization was Joshua Neal Slemons, 29. Other conspirators were Amy Jean Eismann, 24, Thomas W. Crump, 38, and Ashley Renert, 27, who played major roles in the distribution of the cannabis, agents said.

A total of 26 individuals, (5 in California and 21 in Florida), have been identified and have been arrested or are in process of being arrested. Charges include racketeering, importation of cannabis, trafficking in cocaine, conspiracy to traffic in cocaine and other felony drug related charges.

More arrests and seizures are anticipated, as the investigation continues to progress, MBI stated.

Anyone with additional information related to this Drug Trafficking Organization is urged to contact MBI at  (407) 836-9701 or Crimeline at 407-423-
TIPS. 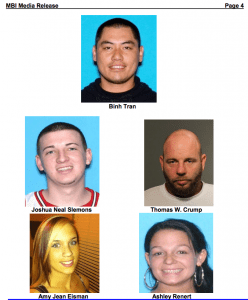