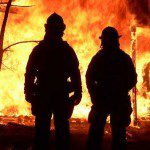 Two Division of Forestry firefighters were killed on Monday while fighting the Blue Ribbon Fire in Hamilton County, the Department of Agriculture said.

Forest Rangers Josh Burch of Lake City and Brett Fulton of White Springs were killed Monday while battling the blaze. They were the first firefighters in 26 years to be overcome while battling a wildfire.

“My thoughts and prayers go out to the families and loved ones of the two courageous men who sacrificed their lives for the safety of others,” said Agriculture Commissioner Adam Putnam. “We can rebuild the structures and restore the land, but the lives of these two heroes can never be replaced.”

Two other Forestry firefighters were injured fighting the blaze, which started last week.

According to the Division of Forestry, more than 200,000 acres across the state have burned this year, making it already one of the busiest wildfire seasons in years.

Disaster: Florida Has Close to One Million Guns