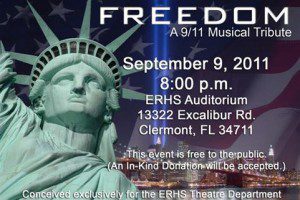 East Ridge High School, located at 13322 Excalibur Road in Clermont, will present “Freedom, a 9/11 Musical Tribute” on Friday, Sept. 9, in the school auditorium.

The musical tribute is being performed by “Rhythm of the Knight.” According to East Ridge High Teacher Vince Santo, this new singing group at the school was inspired by “Glee,” the hit musical comedy-drama television series on Fox.

“Freedom, a 9/11 Musical Tribute” is open to the public with no admission cost. An in-kind donation will be accepted. The musical director for the tribute is Jason Misner, who rewrote some of the musical arrangements for the group. “Rhythm of the Knight” will have a live band performing with them along with two Disney entertainers that will be performing.

“The musical tribute will commemorate that horrible day in America 10 years ago,” Santo said. “I hope the tribute will pay homage to the heroes who responded to the tragedy and honor our local heroes, including military personnel, law enforcement officers, firefighters, EMTs, doctors, nurses, plus others, for their service to our community, state and country.”