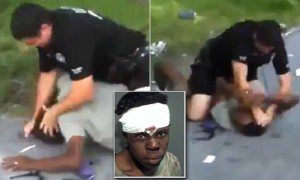 In a total affront to the Orlando Police Department and Mayor Buddy Dyer’s administration, the Citizens’ Police Review Board voted unanimously to reject the internal affairs recommendation to exonerate Officer James Wilson for excessive force. In fact, Chair Henry Lim even said Officer Wilson should have been charged with battery for his excessive force against Terre Johnson, in his opinion. The vote is seen as unprecedented, especially considering Mayor Dyer refused to even mention excessive force or the review board in yesterday’s State of the City address.

“I’ve never seen this happen in Orlando before,” said Central Florida National Action Network President Lawanna Gelzer, who attended the meeting. “I was proud to see every member of the Citizens’ Police Review Board hold their hands up and say ‘no, we reject this.’ I was proud that someone in our local government finally responded to the reality of our community and put the citizens first.”

Wilson is of course the controversial officer who was caught on video beating Terre Johnson, a homeless resident. Johnson spoke with News 6’s Erik Sandoval in November about the brutal incident. Johnson was charged on numerous counts and sat in jail for 45 days, but a jury found Terre Johnson not guilty on January 14th.

Police Chief John Mina ordered the internal affairs investigation and Johnson says he filed a complaint on the matter as well. Normally, the Citizens’ Police Review Board follows the recommendations made to them. But this case was so egregious, the board finally pushed back against OPD.

OPD stated Officer Wilson only received an oral reprimand for the first charge against him, “Conduct Toward the Public.” The department reiterated they supported an oral reprimand, not even written and on the record, as the only punishment for Wilson. They asked the board for full exoneration of Wilson on the charge of use of excessive force but Johnson’s public defenders showed up ready to call out what happened to their client and explain the full situation to the review board.

Before the vote, Gelzer asked the board if Wilson would be exonerated because of his family relationships. Wilson’s mother is an OPD officer and his step-father is Shawn Dunlap, the police union president. The police union was one of the first endorsements for Mayor Dyer’s re-election. Is this why Wilson was only given a slap on the wrist punishment?

Now the City and OPD will have to scramble to respond to the Citizens’ Police Review Board.

“This is the first step to healing, it’s the first step in a long process still to go,” Gelzer said after the meeting. “The City and the Orlando Police Department must begin to take accountability. This was only the first step. We are thankful the Citizens’ Police Review Board has acted and validated the community concerns of excessive force in our city.”

But what does this really mean? Does this Citizens’ Police Review Board actually have any legitimacy and authority within City Hall?

“We now look to Mayor Dyer for his leadership to fix this problem and to do the right thing for everyone in Orlando, even our most vulnerable,” added Gelzer. “It’s now up to Mayor Dyer and the City Council to act, and we are watching and waiting.”

This is only one excessive force of many involving Orlando police. Click here to view the Orlando Police Brutality & Excessive Force News Recap video.