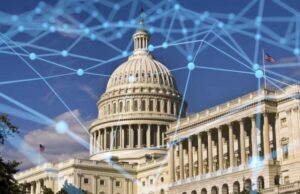 For years, Americans have seen how emerging technologies, such as blockchain, improve the lives of so many while serving as enablers of social, economic and environmental growth. As blockchain moves to the center of the 21st-century, some in Congress believe it is vital the United States maximizes its benefits to catalyze progress and opportunity for the American people. Two of Congressman Darren Soto’s bills, the Digital Taxonomy Act and the Blockchain Innovation Act, are the first blockchain bills to pass in the U.S. House. The bills passed after they were incorporated into the Consumer Safety Technology Act and seek to expand the potential of the blockchain ecosystem while leading the United States to a blockchain-based government.


The Blockchain Innovation Act, originally introduced as H.R. 8153 and incorporated into H.R. 8132, directs the Department of Commerce, in consultation with the Federal Trade Commission, to conduct a study and submit a report to Congress on the state of blockchain technology in commerce, including its use to reduce fraud and increase security. Ultimately, the goal of the legislation is to establish a Blockchain Center of Excellence within the Commerce Department.

“Blockchain technology has an incredible amount of potential for innovation and economic growth,” said Congressman Soto. “I believe our government needs to support that growth, establish light-touch regulations to ensure certainty, protect innovation, stop fraud and enable its appropriate use for government, business and consumers. The study mandated by the Blockchain Innovation Act is a starting point meant to give government agencies a chance to make recommendations before any bills pass with a regulatory effect. These recommendations will perform an educational function to Members of Congress and will pave the way for more actionable blockchain-focused legislation.”

The Digital Taxonomy Act, originally introduced as H.R. 2154 with an amended version incorporated into H.R. 8132, would also require the FTC to submit a report and recommendations to Congress on unfair and deceptive acts or practices relating to digital tokens. H.R. 8153 was cosponsored by Warren Davidson (OH-8)

“As lawmakers, it’s our duty to ensure the United States continues to lead in blockchain technology,” said Congressman Soto. “The Digital Taxonomy Act adds greater jurisdictional clarity for a strong digital asset market in the United States. The amended version of the original bill highlights the importance of digital tokens and blockchain technology in driving innovation and consumer protection initiatives. The bill directs the Federal Trade Commission to produce a report that would detail how the FTC protects consumers from unfair and deceptive acts or practices and provide further recommendations. Hearing the opinion of regulators is an important first step to encouraging regulatory clarity with the aims of promoting innovation and maximizing the potential of virtual currencies for the U.S. economy.”

Congressman Soto was also an original cosponsor of H.R. 8132, the American COMPETE Act, another bill that passed that emphasizes emerging technology efforts, including blockchain.