Try this the next time you have a free weekend. Drive up to The Villages and spend some time exploring. Then walk into work on Monday and tell your colleagues how you spent your weekend. I guarantee they’ll be surprised. 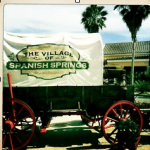 Live in Florida for a while and you’ll definitely hear someone mention The Villages. It’s known as a planned retirement community in the middle of the state between Ocala and Orlando. For some, the concept might conjure up visions of mature folks sitting in rockers on their front porches watching the world go by. At least that’s what went through my head before I paid a visit recently.

I quickly found out the seniors who call The Villages home aren’t just sipping on mint juleps in between rounds of golf.

Yes, it’s true. These folks do love their golf. It seems like there’s a golf course on every corner. And at every turn, you’ll find residents driving golf carts. They drive them everywhere from the local Target store to the neighborhood Chili’s. Some of the golf carts resemble a miniature Rolls Royce while others are adorned with the colors and logos of their owner’s favorite sports team. Golf carts are the favorite mode of transportation in these parts. They’re so prevalent in the community that many streets have special golf cart driving lanes. 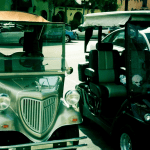 My perception of The Villages prior to going there was a retirement community of Republican golfers living boring lives and not much else. Boy, was I proven wrong! (Not about most of the population being Republican. Don’t be mistaken. This is solid GOP land and probably always will be. But there’s more to this place than a bunch of seniors playing golf in their sunset years.)

Developers have gone to great lengths to create a planned community that keeps seniors mobile and engaged. There are always special events going on in The Villages and tons of recreational activities beyond hitting the green.

But it’s the sense of community that this development has mastered. And planners have been able to do that by creating two large “town centers” that serve as the heart and soul of The Villages.

Just off Highway 27 is a shopping, dining and entertainment complex known as Spanish Springs. They call it “historic” despite it being built just a few years ago. Drive down the main boulevard and it’s like stepping into another world. Think a laid-back Magic Kingdom but without all the rides, screaming kids and Mickey Mouse. The buildings are designed to have an aged look to them and are laid out around a central square where live entertainment is held nightly. 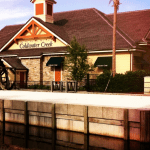 On the day I visited, the square and surrounding streets were bustling with people, both old and young. People were dancing on the square, living it up at the bars and restaurants and shopping in the healthy mix of small boutiques and larger chain stores.

The movie theater, which looked like it belonged more in Albuquerque than Central Florida, was brimming with people. And it was playing real, first-run movies. Folks of all ages were standing in line to get tickets for the next showing of “Friends With Benefits” and “Captain America.”

Having heard about the other town square, I was curious to see how it would compare to Spanish Springs. So I traveled a few miles through Lady Lake and came to the area known as Lake Sumter Landing.

This town square was just as impressive as Spanish Springs and was even more crowded with people. With its Key West vibe, Lake Sumter Landing seemed to have even more entertainment options. Like Spanish Springs, it too had a large movie theater. Across the street on one corner was a Johnny Rockets and on the other corner was a restaurant with a large outdoor bar. 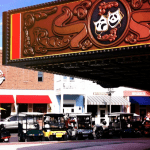 I went over to check out what was going on in the square and people were dancing to a live dj. And he wasn’t spinning Nat King Cole records. He was playing contemporary music. Those who had gathered were loving every minute.

There were even more surprises as I walked down one of the side streets. A large Barnes and Noble, a TGI Fridays, a Cody’s Roadhouse, and plenty of nationally known retailers like Coldwater Creek and IZOD. All of this in The Villages! I was amazed at the wide range of options. 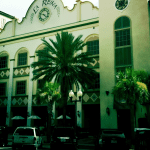 I soon realized I may have just stumbled upon the best kept secret in Central Florida. In all my years living in Daytona Beach, never once did I think about going to The Villages for shopping and entertainment. My preconceived notion of the place was completely wrong. By going there and seeing for myself, I discovered a fun place for all ages. Not a boring retirement community for seniors only. I definitely look forward to repeating the experience again.

AT&T to Bring 5,000 Call Center Jobs Back from Overseas