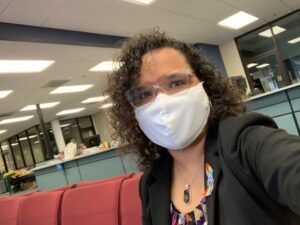 State Representative Amy Mercado has decided she is done with Tallahassee politics and she is ready to challenge a local incumbent Democrat in her upcoming run in Orange County. The COVID-19 crisis couldn’t stop her, she was prepared and wearing a mask as she filed.

Mercado was only first elected in 2016 to the state house, where she served as the ranking Democratic on the House Ways & Means Committee. Before that she briefly served as the Chair of the local Democratic Party, before resigning mid-term. Rick Singh has also been a power player in local Democratic politics in recent years, but apparently is slipping out of favor due to recent controversies.

Singh does want a third term, and he enjoyed popularity early in his tenure. He took on the big players in town – Disney, Universal, SeaWorld and Darden – to bring in more money to the county. He has definitely branded himself as the most qualified to hold the office because his background is actually in the field. But there are multiple accusations of official misconduct against Singh that are being investigated. Singh denies any wrongdoing.


Singh’s recent public problems have been encouraged the decisions by all of his challengers to get in the race, but Mercado presents a true challenge. She has been politically active and searching for an office for many years now. Her father is State Senator Vic Torres, and they are the first father-daughter Latinos to serve in the state legislature at the same time. He has been strong in the labor movement for years. The family knows the political game.

Mercado has said she wants to restore trust to the office, which is obviously referring to Singh losing trust. She’s leaning on that, along with her background outside of politics where she serves as director of operations for the National Mango Board. She is equating the Property Appraiser position as mainly administrative, where Rick Singh views the role as more hands-on in all overall operations and strategy.

No one is sure what the local situation will look like post-coronavirus. The COVID-19 crisis could make this race even more interesting, as Amy Mercado will potentially make this one of the most contested local races, especially for Democrats.