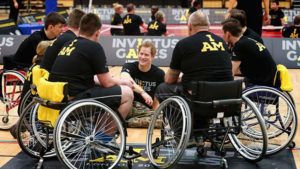 The opening ceremony for the 2016 Invictus Games, an international Paralympic style competition for wounded veterans, kicks off in Orlando tonight with more than 500 competitors from 15 nations. The games are the world’s only adaptive sporting event for injured active duty and veteran service members.

Orlando will host an international audience of athletes, celebrities, royals and even First Lady of the United States Michelle Obama when the 2016 Invictus Games get started at the ESPN Wide World of Sports Complex at Walt Disney World Resort.

Prince Harry, a veteran of the British Armed Forces, announced Orlando as the location for the second Invictus Games last year citing the area’s great tourism infrastructure and Disney’s outstanding sporting facilities as advantages for hosting the games. The Orlando area also has a large veteran population and is home to the Orlando VA Medical Center, which serves over 90,000 veterans.

“I am absolutely delighted to announce that the United States has taken up the challenge and will host the next Invictus Games near Orlando, Florida,” said Prince Harry. “I can’t wait to see the American public supporting these inspirational men and women at the next Games. And what better place to host such a great family event than Orlando.”

The Invictus Games use the power of sport to inspire recovery, support rehabilitation and generate a wider understanding and respect of all those who serve their country as well as their families and caregivers. The Invictus Games will take place May 8th to May 12th. Tickets for the 2016 Invictus Games are on sale.