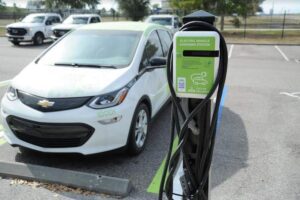 The City of Orlando and OUC—The Reliable One have unveiled the new 100-station Orlando Public EV Charging Network, and to start Earth Month officials “plugged in” at one of the new electric vehicle (EV) charging stations at the John H. Jackson Neighborhood Center (map of entire EV network below).

Orlando Mayor Buddy Dyer and Commissioners Regina Hill and Robert Stuart posted it was “memorable” to be at the Jackson Neighborhood Center location in Parramore because “we want electric vehicle stations to be accessible to residents from every neighborhood in our community.” Mayor Dyer’s ridiculous social media post doesn’t account for the low income, poverty conditions he has fostered in Parramore and surrounding areas of the city. According to Quartz, the average cost of a new car in June 2019 in the U.S. was $36,600 and a used EV will still cost around $15,000. Mayor Dyer and the City Commissioners were simply making another political stunt in Parramore to cover their failure in city policies.


Otherwise, in total through the project, a partnership with OUC and the American Cities Climate Challenge, the City of Orlando has installed 100 new EV charging stations spanning across 33 locations throughout the City, including at parks, neighborhood and senior centers, parking garages, and public venues. Each location will also have at least one ADA accessible EV charging station to ensure the services are accessible to all drivers.

For a full map of all 100 locations, click here.

As part of OUC’s goal to ensure EV charging stations are equitably and conveniently installed throughout the city, the utility recently announced another partnership with the City and Orange County to build an EV charging hub on Robinson Street near I-4 on the OUC-owned land next to Ace Café. This project is the largest of its kind in Florida with 22 fast charging stations – including 16 superchargers for Teslas. The site will be complete later this year.